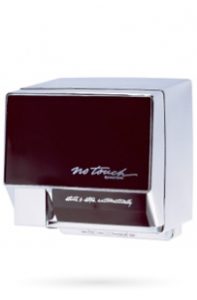 Cost: There is no getting around the fact that a paper towel dispenser is much less expensive than an electric hand dryer, but that is where it stops. An electric hand dryer is far less expensive to operate, studies by the EPA show that regular dryers cost a little over one cent per operation while high speed dryers cost less than a cent, these cost calculations include amortization of the dryer in the first place.

Paper towels on the other hand need the towels as well as a place to dispose of them. The approximate cost for two paper towels, overhead including labor for clean-up is over six cents.

The electric hand dryer wins this argument hands down.

Environmental impact: The life expectancy of an electric hand dryer is up to seven or eight years on average. Hand dryers are far less damaging to the environment, the only environmental impact they contribute to is the production of electricity which is minimal.

Paper towels on the other hand contribute more than five times the amount of greenhouse gas than hand dryers do. Paper towels must be produced, packaged and transported and disposed of, none of these issues affect an electric hand dryer.

Hygiene: There has been a great deal of debate about the hygiene aspect. Paper towel manufacturers are forever coming out with studies pointing out how clean and free from bacteria their product is. There may have been some truth to this years ago, but an electric hand dryer today is not the same as an electric hand dryer of some years ago. You can’t say for paper towels, they are what they are. The next time you use a public facility an find the floor covered with fitly wet paper towels and paper towels causing toilets to overflow, you know right then and there who wins the argument.